On February 24, the four judges of the No.3 Petty Bench at the Japanese Supreme Court (Chief Justice: Toshihiro Kanaya) handed down a unanimous decision to dismiss an appeal filed by Nikken HP side over the “Geisha Photo Case” that contested the issue of Nikken HP indulging in pleasure with Geishas at an expensive Japanese restaurant in Akasaka, Tokyo. The decision has confirmed a complete defeat of Nikken HP side that made the appeal. Moreover, the decision has unmasked the true nature of Nikken as the HP who is addicted to dissipation that will be labeled to eternity.

Soka Gakkai carried the photo that vividly captures Nikken HP to be completely absorbed in pleasure in their organ “Soka Shimpo” (November 4 & 19, 1992). They denunciated Nikken’s act to run counter to the spirit of the two founders of Nichiren’s Buddhism that admonished against one “spending his time in idleness and chatter” and, thus, concluded him to be a disqualified HP.

However, rather than facing and reflecting his indecent conduct squarely, Nikken, conversely, harbored a grudge against the Gakkai and, unbelievably enough, he made a great fuss by taking the matter to the court.

Furthermore, being afraid of making an appearance at the court, he removed his name from the list of plaintiffs and placed “Nichiren Shoshu” and “Taiseki-ji Main Temple” that have nothing to do with the matter as the plaintiffs to file the case despite of the fact that the case being an issue over his own scandal.

Be that as it may, in December, 2000, the Tokyo High Court frustrated such imprudent scheme of Nikken HP. The court precisely judged a suit to be “a case that was filed by a person who has no qualification to make an appeal” and, as a result, dismissed the claim by Nikken HP side. Japanese Supreme Court supported the decision and thus the case was finally concluded as a complete defeat by Nikken HP.

It is the fourth time for Nikken and his followers to be given a guilty verdict from the Supreme Court in only over 6 months. This is the most deplorable event on record of the priesthood. There is no doubt that the calls for elimination of Nikken’s name from the record of successive High Priests will rise like a flood tide all the more. 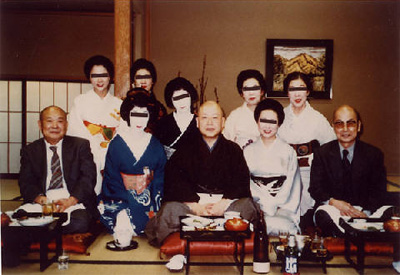 Nikken HP indulging in pleasure with Geishas at an expensive Japanese restaurant in Akasaka, Tokyo