The Case of the Disguised Temple in South Korea

In South Korea, there was an incident in which the local authorities discovered that Nichiren Shoshu had been operating a building for religious purposes whilst misrepresenting it as a welfare facility.

This concerns a four-story building in the city of Pusan, the country’s second largest metropolis. In August 1991, Nichiren Shoshu purchased this building and started renovations for use as a temple. However, their application to the authorities stated that it was to be a welfare facility called Ik Noin dae Hakkyo (Welfare Center for the Elderly).

Local residents later discovered the truth and lodged complaints. The local authorities imposed harsh administrative sanctions, levying a mandatory fine and cutting off water and electricity to the building. The officials also turned down an application from Nichiren Shoshu to re-register the building as a religious facility. As a result, they had to evacuate and sell off the property. 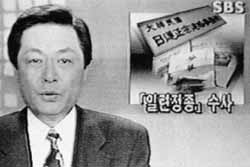 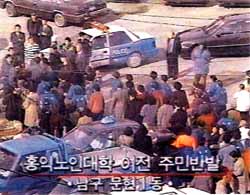 More than 200 enraged local citizens rushed to the site to protest against the illegal temple (from Korean MBC TV), a police car can been seen to the left