In June 1992, Nichiren Shoshu tried to take possession of Ichijoji Temple belonging to SGI-Brazil, the local association which is part of Soka Gakkai International, by convening an unlawful general meeting and arbitrarily appointing their own choice of directors to the temple’s management. Originally, SGI-Brazil bought the land and raised funds for the temple. SGI-Brazil then established a corporate body (NSTB) and management and ownership of the temple transferred to this body whose directors were appointed by SGI-Brazil. 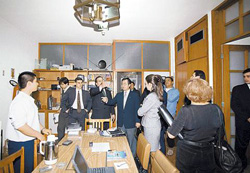 The staffs of court got into the Ichijoji Temple which Nichiren Shoshu
tried to take possession belonging to SGI-Brazil.