In 1996 the Nichiren Shoshu priesthood destroyed the Grand Reception Hall (Daikyakuden), a major concrete building for ceremonies and welcoming visitors which had been donated in 1964. This building, considered an outstanding example of modern architecture, had been awarded the Architectural Society Award in 1964 and the Builders Society Award in 1965.

The Grand Reception Hall had also housed a priceless ceramic mural entitled “Phoenix,” a joint creation by Tokuro Kato, living national treasure of Japan in ceramic art, and Matazo Kayama, recipient of the Order of Cultural Merits. The “Phoenix” measures 3m x 12m. Following the destruction of the building, this mural was broken into pieces.

This rare artwork was not only an ownership thing of Taiseki-ji Temple but also a cultural asset that Japan boasts to the world.

Naturally, the voice to defend this cultural asset rolled from the inside and outside of the denomination to say nothing of the building and it happened.

However, Head priest NIKKEN did not listen to such a voice at all, and destroyed the mural “Phoenix” tragically with the furnace.

And, it reassembled by the fluster as soon as the criticism of the inside and outside was received. However, the realities are too awful ways of painting the damage part and cheating.

It is exactly a blasphemy to the culture and the art. The voice of the protest goes up from a lot of people to High priest NIKKEN who doesn’t understand the value of the artistic production at all. 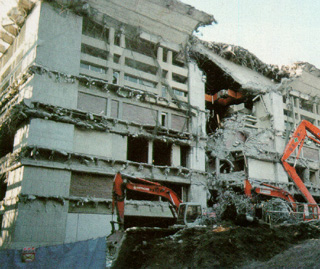 The Grand Reception Hall was destroyed 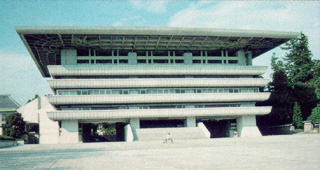 The Grand Reception Hall before destroyed