On September 27, the Ori-o Police Station in Fukuoka Prefecture arrested Taketomi Doshin (aged 39), chief priest of a temple in Shimonoseki city, for the alleged violation of the Article for the Healthy Upbringing of Juvenile through his lewd behaviour.

According to investigations, at around 2 pm on September 10, Taketomi allegedly made lewd advances on a third year high school female student (aged 17) from Okagaki-cho at a hotel in Onga-cho. Taketomi was fully aware of the fact that she was under-aged. The two got to know one another through “Two-shot Dial”* at the end of July. Taketomi admitted “having intimate relations with the student on 4 or 5 occasions”.

The student’s mother found her daughter acting rather suspiciously and found out the truth when she confronted her daughter. The mother made her daughter arrange a meeting with Taketomi near her residence. When Taketomi noticed the mother, he tried to run away in his car but accidentally knocked into the mother. The police officer discovered the truth about Taketomi’s lewd behavior during his investigation of this accident report.

Footnote: * “Two-shot Dial”: A telephone service where a computer arranges members of the opposite sex to meet. It has been misused and has become a cause for social concerns as it has become the cause of many sexual crimes recently. 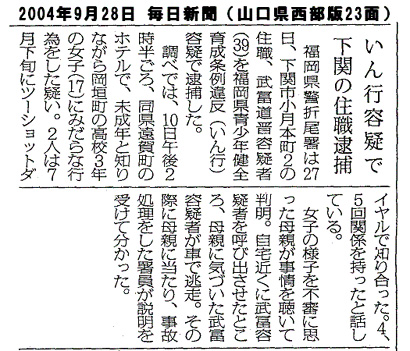